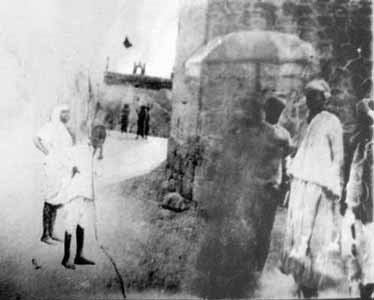 For humans, feats such as invisibility require complex scientific algorithms, invisibility cloaks, and armies of scientists who merely attempt to replicate, figure out, or debunk natural phenomena that are a product of God’s supreme will.

For Baba, however, none of these artificial tools are necessary. His will is all that is needed to work out the most mysterious of miracles. We all know that Baba’s will is obeyed by the entire universe, but the miracle we are about to narrate will prove that His will extends to inanimate things and our “so called” technical gizmos as well.

It is funny how technical inventions are fancied as being superior in terms of technological advancement, but when tested against the Divine Himself, even the most sophisticated human inventions are light years behind.

It so happened that once in Shirdi a devotee desired to take a picture of Baba. He approached Baba to see His approval but for some reason Baba was not interested. He told the devotee to

capture a photo of His feet as opposed to the entire form. For some reason, the devotee ignored this command and went on to click a picture that covered the entire procession.

Although the devotee failed to follow Baba’s instructions, the inanimate camera obeyed. When the picture was developed, all the devotees in the background and the umbrella are visible but Baba appears as a luminous light and only His

feet can be viewed.

We came across two versions of this picture and both are provided in this post. Indeed, Baba is the most mysterious and powerful incarnation.

Furthermore, we are also providing a clearer version of the picture where Baba had consented and hence His form is clearly visible, much to the delight of His devotees.