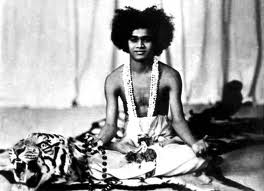 Chant the divine name with a heart suffused with love. The name is indeed a panacea for all sorrows, and the most powerful destroyer of sins.

Swami has assured us: “Chanting the divine name will destroy even mountains of sins and sorrows, and grant liberation. Do not fear.”

Once a pilgrim reached a forest at night. He found that he had to go through five miles before he could reach a village. He had a small lantern in the hand; he lighted it, but found to his dismay that the flicker could light only a yard ahead of him. How can I walk five miles with the help of this tiny circle of light, he lamented. A wise man passed that way, saw his plight, and said, “My dear fellow, hold that lantern in the hand and walk on. You can go five miles or fifty, and you will always be in the circle of light around the lantern.” A small torch can help a man pass through a thick forest. The instrument may be small, but it can do work out of all proportion to its size. So, do not think that the Name of the Lord is just a mutter of a syllable or two. Though small, through it one can realize the principle of Divinity.

Lord is present where the name is

The Lord announced to Narada (a divine saint): “Wherever my Bhaktas [devotees] sing my glories, I install Myself there.” A house is kept clean by daily sweeping; in the same way constant Naama Smarana will keep the heart constantly clean, pure, and a worthy receptacle of the Lord’s presence and grace.1

The Names Raama, Hari, Hara, Sai, Baba, Krishna, Jesus, Allah–having each two syllables are all derived from the word Prema [love], which is the essence and core of the Atma [soul]. Love has to prompt our thoughts, penetrate our words and promote our actions. The melody must emerge from the heart, from genuine Love, which is so ardent that it is thapas [austerity] itself. Samkeerthanam from such soulswill certainly liberate the individual and transform the world.2 Chanting the name is so easy, one can even chant while playing, working, traveling, and performing activities of daily life.

The Name is the container of infinite potence. Even common words denoting things do possess some potency. For example, when the word denoting some thing very sour to the taste is pronounced, you find that your tongue waters. When the word denoting something that is awfully disgusting is pronounced, you are afflicted with nausea. When such is the effect of the pronunciation of common words, what can we say of the tremendous transformation that takes place when the sweet Name of the ever-present Indweller is pronounced! 3

The Name must flow in the mind in an uninterrupted stream. Naamasmarana is yoga [process of uniting with God]; of calming the agitations of the mind; of subduing waves of emotions and feelings. The Naama [name] must always be associated, while intent on the Smarana [remembering, recalling], with the Naami [the Named One]. It is not a mere sound; it is the symbol of a Form, of a Fact. When the branch of a tree rubs against another, heat is generated and in the depths of a forest, fires are started when this heat grows strong. But the process must be without break; breaks only decrease the heat. So, the repetition of the Name must be without break. Then the fire of Jnaana [Realization of Reality] will burn all weakness and delusion. 3

Jnaana Dev and Naama Dev were walking through a forest. They felt thirsty but could not catch sight of a well or a lake anywhere. At last they saw a well and ran towards it. They eagerly looked into it; there was water in the well, but how could they drink? There was neither a rope nor a vessel to draw water. There was no question of somehow going into the well as the well was dilapidated. Jnaana Dev simply closed his eyes. Soon he was transformed into a bird. He flew into the well and drank water to his fill. Naama Dev began chanting the name of Lord with intense devotion. The water level began to rise slowly until at last it was within reach. He just put his hands into the well and drank water. Such is the power of the Name.4

Young Raamadas [a well-known saint] was once challenged to prove his archery skills. He was asked to shoot down a flying bird; intent on proving his abilities, he immediately shot a flying bird with an arrow. Killing of life, however, is a great sin and a few priests asked him to repent for this deed. Raamadas promptly closed his eyes and prayed to God wholeheartedly, repenting for his sin and asking for His forgiveness. Then he opened his eyes and pointed out to the prieststhat the dead bird had not regained life, in spite of his repentance. The priests, not knowing God’s power,said reprovingly, “How crazy you are! Repentance cannot undo what is done; but its purpose is to enable you to make up your mind not to repeat such misdeeds.”

“That is no repentance in my humble view;” countered Raamadas, “God and His name are so powerful that if we pray sincerely, His grace will bring the bird back to life.” So saying, he picked up the dead bird, hugged it to his bosom, and with tears flowing down his cheeks, he wholeheartedly prayed, “O Raama, if I have been chanting your name with all my mind, heart and soul and if it is a fact that I have killed this bird out of ignorance, may your grace either revive this dead bird, or take away my life also along with that of the bird.”

As he concluded his prayer, the bird fluttered in his hands. Then he opened his eyes, thanked the Almighty and released the bird into the sky. Astonished at this miracle, the priestsexclaimed in one voice, “Revered sir, forgive us for not recognizing your greatness. Since you have the capacity to kill a flying bird with a single arrow, and also the capacity to revive the dead bird, you will hereafter be known by the worthy name of ‘Samartha Raamadhas.’”5

One can chant any Divine Name of any form. It must be chanted with devotion and in an uninterrupted manner. Whether at work, at play, or in the midst of travel, the divine name can be chanted in the mind or aloud with utmost ease. Let us make a firm resolution to hold fast to this easy remedy for attaining happiness.

5. Discourse on 19-3-1993,  when Bhagavaan gave a detailed account of the life of Samartha Raamadhas, the great Mahaaraashtra saint.