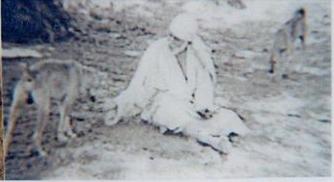 Many years back, I had invited one of my friends to Baba’s mandir in Flushing, New York. He was browsing through some books on the shelves when he came across the following sentence: “Touch My feet and I will crown your head.” No sooner did he read this sentence, he dashed across the room and came to me. Since this was his first visit to Baba, he seemed rather upset. “Why does Baba say like that?” he questioned. I was rather young and did not have a response to his question but seeing that his intention was only to understand Baba’s message I turned to Baba to explain the significance of this message.

rompted me from within: “Tell him that it means if you surrender your ego to my feet, I will crown you with knowledge.” I could have never thought something like that but immediately shared the message with my friend. He was very excited to hear this explanation and became a deep admirer of Baba from thereon.

Surrender is not complex. It is very simple. But our inner fears often come in our way. Baba once made some very emphatic remarks. The gist of his message was as follows: “You surrender yourself to the pilot when you get into the plane. You never make an effort to check whether she/he is fit to drive. You implicitly trust a fellow-man to take you from A-B. However, when it comes to God you question everything.”

It isn’t that we are the only ones who surrender. God surrenders back to His surrendered devotees in turn. In that state, God stands at the beck and call of His devotees, eager to render any service possible.

When we surrender, God will surely render

Surrender is a very powerful state, one in which God surrenders back to his surrendered devotee. It is like a kitten who blindly trusts the mother to put her in a safe place. The mother holds the young kitten in her jaws and takes her from place to place but the jaws never hurt t

he child. The kitten on its part simply meows the mother’s name, knowing fully well that she is safe.

Once, a sadhaka (spiritual aspirant) learnt about his nearing death. He was terrified and vehemently prayed to Shirdi Sai Baba. Baba appeared to him in meditation and said that He would not reverse the verdict as his allotted time on earth was over, but also added that there was one surrendered soul (Guruji) whose prayers could never be refused. The sadhaka immediately rushed to Dr. K.V. Raghava Rao, on whose request Baba prevented the demise and extended the sadhaka’s life by eight years.

Baba surrenders back to those who surrender to Him. God is pure compassion and love, nothing else.

If we let go, He will find a way

We are so afraid to let go. It is just like a child. The mother wants to feed wholesome food to the child, but the child wants to eat on her own. Once, a young student was visiting Parthi. He had to make a life-changing decision and was extremely confused with the outcome that was to occur. All along, he was constantly vacillating like a pendulum.

Those who have visited Parthi may be aware that there used to be very long lines and a token system was implemented wherein numbered lots would be drawn to decide which line a devotee would be seated in. This boy would fight every single day to be in the first line but inevitably would end up far behind.

Finally, one day he let go of his desire to choose. With a true heart he said, “Swami, you decide what has to be done. I trust you completely and leave everything at your feet. Thy Will will be done.” On saying this he closed his eyes and went and sat in a random row. Much to his surprise, that day when the lots were drawn, his row was number one. He had the closest darshan of Swami on that day — in fact, the closest he had ever had in his young life. Indeed his small act of surrender had drawn an immediate response from God.

Needless to say, by the time he returned home Swami had made the decision for him and his dilemma was resolved in his favor.

If we surrender to Baba sincerely, He will take us all the way to the most beneficial outcome. The entire universe is in Baba’s hands.