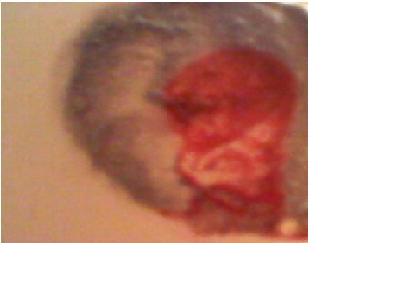 Rudra Abhishekam was started at Om Sai Mandir on June 11, 2007. Since then Athi Maha Rudram (14,641 chants of Rudram, a vedic hymn) has been performed nearly twice. During the prayers we were blessed with several miraculous manifestations, ranging from the appearance of divine Ganga Jal to images of various deities.

Generally, as soon as we finish the prayers we decorate the deities with ornaments and apply a kumkum (vermillion) mark on the forehead of all deities. On September 19, 2011, we were performing the Rudram as usual in the morning.

As soon as the prayers were finished, we applied the dot of vermillion on the white shiv ling at Om Sai Mandir. To the wonder of all devotees present, the vermillion dot immediately turned into a portrait of Shirdi Sai Baba. The attached image was taken during the prayers and devotees can see how the dot of kumkum has transformed into Baba’s face. His eyes, nose, beard, lips, face, head-dress — everything can be seen very clearly.