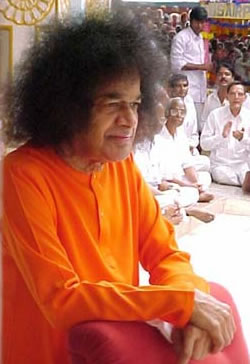 After attending the Sunday bhajans at Om Sai Mandir, the author was on his way home when he came across a four-year-old girl running alone on the street. An unseen voice urged the author to help the little child.

The child was very difficult to control and was impatiently hurrying to the main intersection, an area frequented by many speeding vehicles. When he questioned her about her whereabouts she did not give a definite answer and babbled strange words. It was very clear that she was lost.

How was the author to control her? She was unwilling to take his help and was intent on running in an unknown direction. It was a dilemma. If he were to force help on her, people could easily mistake his intentions. Leaving her alone was not an option either. Baba was the only one who could suggest a way out of this dilemma, and so he fervently invoked Baba’s grace.

The invisible voice again drew the writer’s attention to the girl’s forehead. There was a distinct vermillion mark, suggesting that she had just visited the Ganesh temple across the street from Om Sai Mandir. This was a wonderful clue. Next, the voice suggested, “Ask her to run a race with you. That way she won’t resist your help.”

It worked. The girl cheerfully ran in the direction of the temple. When they reached the temple’s cafeteria a group of people were frantically looking for the girl and as soon as they saw her they felt very relieved. It was a wonderful reunion — all hugs and kisses.

How did the author reach the spot just when the girl was lost? Who was the invisible voice guiding him through the entire situation? It was none other than Baba. Were it not for Baba’s help, the innocent child could have fallen in serious danger.

When devotees are in harm’s way, Baba cannot but rush to their help. This has been the experience of countless devotees. When Baba was physically present in Shirdi, a devotee visited the place to seek His blessings. As is normally the case, some villagers misguided the man into visiting a woman who offered her services to travelers.

The two engaged in a conversation and just when the man was to face spiritual downfall, the door slammed open and
he saw Baba physically standing there. Baba made hand gestures, indicating as if that you have come to seek my blessings and is this what you engage in? The devotee immediately left the place and was saved by Baba’s timely warning.

Nanasaheb Chandorkar, too, was saved from physical harm because of Baba’s vigilance. Nana was on a pilgrimage to a shrine that was situated on a hill. When he was climbing the hill, he felt intensely thirsty and extremely weak.

He prayed to Baba and at that very moment a man came to him and offered water. It need not be mentioned that the man was none other than Sainath. In fact, at that very instance, Baba remarked to villagers at Shirdi that he just gone to deliver water to Nana. None understood this comment but when Nana visited Shirdi, the purport of Baba’s remark became clear.

Our beloved Baba keeps an ever-watchful eye on His children and He ensures our safety and welfare in every way possible. He is ever vigilant and ever-ready to help everyone.

One thought on “Baba Always Watches Over His Children”