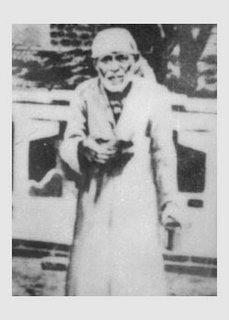 Once, there was a long line of visitors in Shirdi. Despite the scorching heat and humidity, they were anxiously waiting to have a glimpse of Baba. The line had both rich and well-to-do individuals who wanted to shower expensive gifts on Baba. Many had brought with them expensive food items, but little did they know that Baba cares only for our love. He does not look at the price of our offerings.

In that line, all the way toward the end, was an elderly lady with worn-out rags. Her emaciated form gave the appearance that she had not eaten for a long time. She had no shoes on her and she was supporting herself with the help of a makeshift wooden cane. No one noticed the lady as the line extended far away from Dwarakamai.

Does anyone need to inform Baba, though? Everyone was bewildered as Baba suddenly got up from His seat and ran toward the end of the line. Everyone was wondering: What happened? Why did Baba rush like that, leaving all of us standing here?

He crossed the entire line and reached the last person who was waiting there. It was that old lady! Baba held her hands with much love and personally took her to His seat. He sat there and looked at this devotee with much grace.

The lady’s eyes were filled with tears. Baba had left all these great people and had sought out someone so poor and destitute. She couldn’t believe what was happening. Yet, she was overjoyed to have the opportunity to look at Baba’s beautiful form. Suddenly, Baba asked her, “Mother! I am starving. Didn’t you bring something for me to eat? Please, mother, give it to Me immediately.”

She was flabbergasted. How did Baba know she had brought something for Him to eat? At the same time, she was very nervous as she wasn’t expecting Baba to ask her this question. In her wrinkled hands, she was holding half a piece of bread and a stale onion. She burst into tears and said, “Lord, I had brought one piece of bread and an onion for you when I came, but I was unable to bear the heat and exhaustion and I did not want to pass out before seeing you, so I ate half of the bread and half onion, while I saved the other half for you. I did not tell you because so many devotees had come with the tastiest of dishes. I was embarrassed to offer you a stale piece of bread an onion — and that too one I had already eaten.”

Baba would not have it any other way. He said, “Mother, please feed Me as I am very hungry and I am anxious to eat that delicious bread you saved for Me. What harm is there if I eat from your hands, mother.”

Her joy knew no bounds as she fed the Lord with extreme devotion. As Baba was eating from her hands, the devotees were remembering the story of Lord Rama and Shabari.

Such is our Baba. He looks only at the depth of our feelings. Rich, poor; good, bad … none of that maters to Baba. He craves for our love, and nothing else.

One thought on “Baba Looks At Our Heart Only”