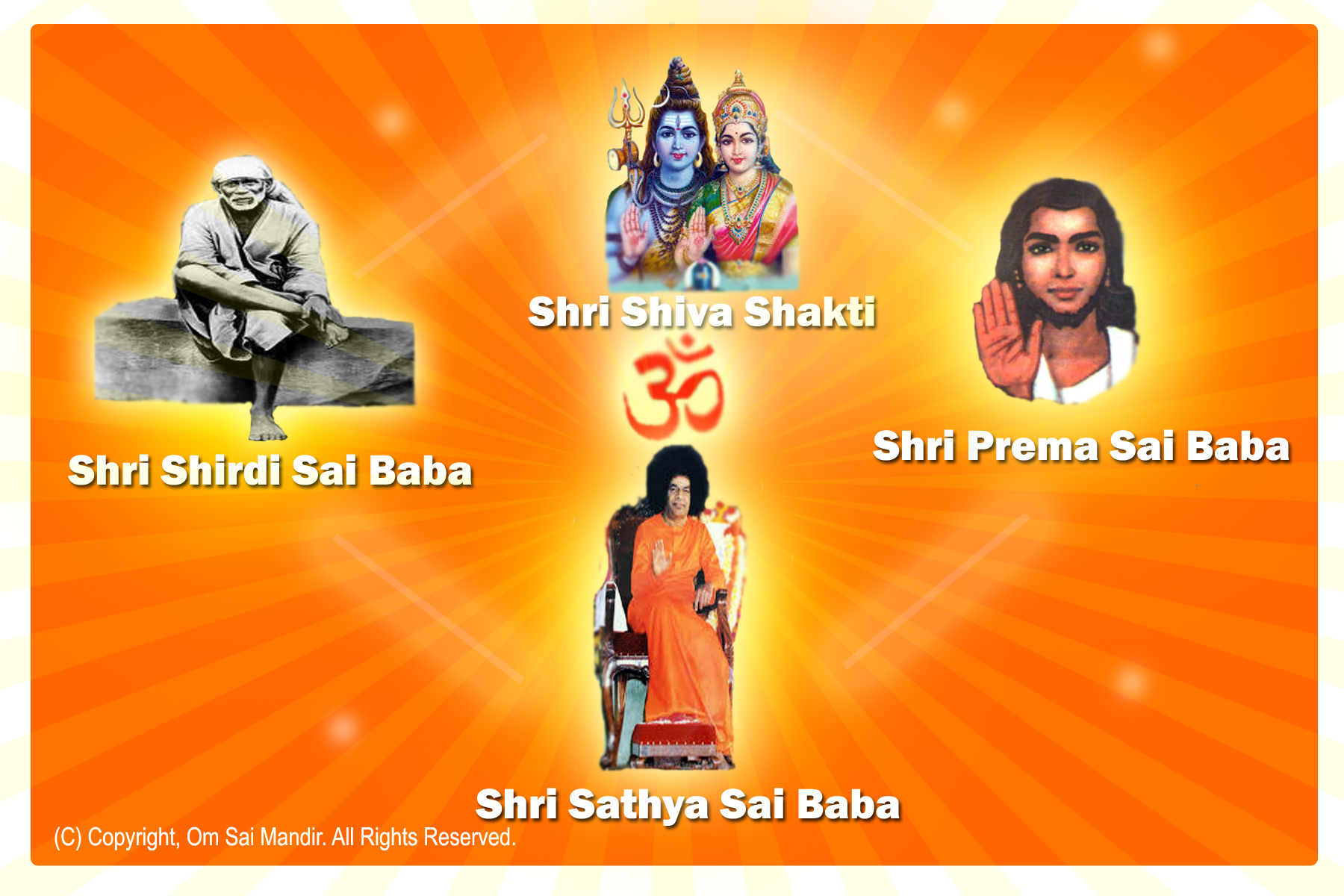 Baba’s devotees often identify Him as a particular form that is deeply cherished in their love-filled hearts. Some invoke the formless God as Shirdi Sai, while others prefer to pray to Him as Sathya Sai, and still others follow the tenets of their own chosen faith or beliefs.

Baba welcomes all these forms of worship and responds to a devotee’s heart-felt call instantly, no matter what name or form is chosen by the worshiper. As Baba has often said “ALL names and forms are Mine. I respond to you in the manner you choose.” In both Shirdi Sai and Sathya Sai Avatars, Baba has confirmed this fact and has identified Himself as being one with every Divine identity known to man.

In fact, Sai Himself is not one Avatar but a series of three consecutive divine manifestations that have chosen to incarnate for the redemption and uplift of mankind. The first incarnation in the trinity of Sai Avatars is Shirdi Sai Baba, the Lord of Shirdi; the second, Sathya Sai Baba, the God of Parthi; and the third, Prema Sai Baba, who is to incarnate in due course.

Although the Avatars form a trinity, in truth it is the same God who has chosen to incarnate in three different forms. There is a very interesting story behind the three consecutive incarnations.

The declaration confirming the three Sai Avatars was made in July 1963, when a rather young Sai had taken over a deep form of paralysis that impacted His left hand, leg, and eye for eight consecutive days. He suffered three fatal heart attacks that no ordinary human being could have endured. During this assumed illness, Baba refused to accept any medication or medical treatment. He had willed the illness and the mysterious purpose for the same was revealed during the Guru Poornima Discourse (1963).

On the eighth day of the illness, Baba declared that He would give Guru Poornima darshan and discourse as usual. He was taken on a wheelchair to the area where tens of thousands of devotees had gathered to catch a glimpse of their beloved Sai. As He was seated in the midst of the gathering, Baba whispered in an inaudible and extremely feeble voice “Vinipisthundhaa?” (Do you hear Me?). He then signaled for a glass of water to be brought to Him. Baba sprinkled a little water from the glass on His left hand and leg and stroked His left hand. Immediately, the left hand regained vigor and with both hands, He stroked the left leg.

Lo, the paralysis disappeared instantly. Baba then rose to speak to the august assembly and delivered a powerful Guru Poornima Discourse as if nothing had happened to His physical frame. During the discourse, Baba explained that He had taken the illness to save a devotee who was to undergo paralysis and three fatal heart attacks.

The story of three Sai Avatars

Baba was born in the Bharadwaja Gotra (lineage), Apastamba Sutra. This Bharadwaja Rishi was a great saint, who had mastered several Vedic texts, but despite his arduous penance and effort for nearly three hundred years, he was unable to learn the Vedas, which measured the size of three mountain ranges. Pleased with his penance, Lord Indra appeared to Him and taught the sage a yaga (form of fire worship) that would grant him the fruit of studying all the Vedic texts.

As the sage proceeded to perform the yaga, he wanted to invite Shakti (Mother Parvati) to preside over the ritual. Accordingly, he visited Kailasha, the mythical mountain in the Himalayas where the Divine Shiva and Shakti reside. There, Lord Shiva and the Divine Mother were engaged in a cosmic dance. Although the Mother had seen the sage, she tested his patience by casting a sly glance and smile at him.

After waiting in the biting cold for eight days, the sage was unsure whether he had been ignored or rejected and decided to return to his hermitage. Just as he was descending from Kailasha, he suffered from a terrible form of stroke that affected his left hand, leg, and eye.

As he was about to fall, Lord Shiva appeared there and held his devotee in His own hands. Shiva sprinkled some water on him and cured the paralysis immediately. Pleased with his devotion and patience, the Lord assured him that both He (Lord Shiva) and Shakti would preside over the holy ritual to bless the saint.

(i) Lord Shiva would be born in the Bharadwaja lineage thrice—Shiva alone as Shri Shirdi Sai Baba; Shiva and Shakti as Sathya Sai Baba; and Shakti alone as Prema Sai Baba.

(ii) Furthermore, as atonement for Mother Shakti’s neglect of the sage for eight days, she would undergo a similar stroke and on the eighth day of the disease, the Lord would revive Her just as He had saved the sage at Kailasha.

In fulfillment of the boons and Lord Shiva’s promise, the same Lord has chosen Kaliyuga as the time for His three incarnations. It was for this reason that Sathya Sai Baba’s left hand (representing Shakti) underwent paralysis in July 1963. The right side of Baba, symbolizing Lord Shiva, sprinkled water and revived Her, just as He had promised Sage Bharadwaja.

Blessed is Sage Bhardwaja of yore, who became an instrument for the descent of Lord not once, but thrice. Upanishads, too, confirm that there would be a 250-year period wherein God will incarnate thrice. Future generations will look at us with such awe, for we are the “Sai Generation”. They will admire our good fortune, just as we appreciate the destiny of those who walked on earth at the same time as Rama, Krishna, Jesus, Buddha, and other divine beings.

We are so blessed to witness (and be part of) a momentous time in the history of mankind. Sai-Yuga, it is!